Last week, I wrote a piece about some recent news involving the topics of Elon Musk, Nick Szabo and Satoshi Nakamoto. This article is a follow-up to that one. The bulk of the article consisted of Musk implying that Nick is the real Satoshi. CoinGeek was unhappy with this news.

Given that Elon Musk's Tesla holds Bitcoin on their balance sheet, and he's the world's richest man, people tend to pay attention when he speaks.

Ever since Craig Wright made make a big splash in the crypto world by cosplaying as Satoshi, he's failed to reach any widespread support, for obvious reasons.

From the beginning, when Calvin Ayre essentially bought Craig's story, they've been devising new ways to attract more unsuspecting investors to BSV. One of their newest ploys in August was trying to onboard Elon Musk. A video popped up in my recommended feed on Youtube in August showing a pathetic Faketoshi begging Elon Musk to notice him and BSV. They even released an article. Unsurprisingly, nothing ever came of it. It's doubtful Elon Musk even knows BSV exists or who are behind it.

Faketoshi and Calvin are scared of the real Satoshi

On the flip side, Elon clearly had a deep understanding of Nick Szabo and the origins of Bitcoin in his 3rd interview with Lex Fridman. I've done a great deal of research on the topic of Satoshi Nakamoto, and Nick is certainly a top candidate. In part one of this analysis, I detailed how similarities between bit gold and Bitcoin are simply uncanny. Especially, when you consider Satoshi didn't even cite it in the white paper; it's hard to imagine. Regardless of whether Nick is truly Satoshi, what he represents is a threat to Craig and Calvin.

Hal Finney is another popular candidate, but Satoshi did talked online after his death. However, the message's authenticity has been debated.

Adam Back is also on the short list to be Satoshi Nakamoto. Back has a PhD in distributed systems and invented Hashcash, the mining algorithm of Bitcoin (and also present in bit gold). Considering he's a British man and expert programmer, he fits the bill. Blockstream is a Bitcoin software/hardware company co-founded by Adam.

Blockstream is influential to the point where some of their programmers have shaped the biggest Bitcoin upgrades. Bitcoin programmer Greg Maxwell was an early worker at Blockstream. He's the architect of the the latest Bitcoin upgrade Taproot and an enemy of BSV; more on him later. All these facts about Mr. Back means he's automatically a threat to Craig and Calvin's interests.

Adam sometimes makes fun of Craig on Twitter. Nick on the other hand has only made a few funny jabs on Twitter about Craig like this one. However, Nick did speak in a panel with Craig back in 2015 where he correctly told Faketoshi that Bitcoin script is not Turing complete.

When they speak out in public like this, it casts shade on BSV, since Faketoshi has no credibility. It went so far as to Craig filing a defamation lawsuit against Adam Back. Like Faketoshi's attempt to gain Elon Musk's mere attention, it failed miserably. They ended up dropping the lawsuit against Adam and paying all his legal costs!

If the real Satoshi was to move some of his estimated 500k to 1 million BTC, Craig would be screwed. At that point, unless the wallet address was controlled by Craig or someone on his team, it would be obvious to the world that it was not Craig. The story that Craig is telling the world is that he controls 1 million BSV, which is the real Satoshi stash, since BSV is the real Bitcoin. Of course, this is just delusion.

When you challenge the average Bsver like Kurt Wuckert Jr. with topics that oppose their agenda, they simply respond with "Hi Greg" since Bitcoin programmer Greg Maxwell is their arch-enemy. They can't think of anything better to say.

In the future, there is a low chance of Craig ever suing Nick Szabo or Adam Back (again). They live in their own echo chamber now, where the only truth is that Craig is Satoshi. If Craig does decide to start some squabbles with them, be sure to grab your popcorn. I'm sure the real Satoshi is grabbing his. 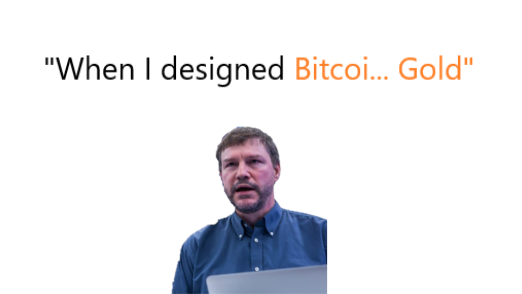 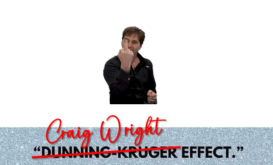